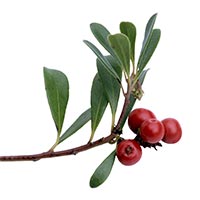 Bearberry, also known as uva ursi, is most frequently used by Chinese, European and Native American’s to treat urinary tract disorders. Until the discovery of sulfa and antibiotics, bearberry was the treatment of choice for treating bladder, kidney, and related infections. The name bearberry comes from the fact that bears love to eat the berries. This herb also helps keep the pH balance of urine from being too acidic. It has a sedating effect on bladder walls and is considered the best at treating chronic inflammation of the bladder or kidneys. Bearberry is also considered a visionary herb that helps those seeking increased psychic ability.

Bearberry is a plant in the genus Arctostaphylos, which also contains manzanita. The plant is a woody, groundcovering shrub that has leaves that are shiny, small, alternating and feel thick and stiff. The undersides of the leaves are a lighter green than the tops. New stems can be red if the plant is in full sun, and greener if growing in shadier areas. The bell-shaped flowers bloom in spring and are white or pink. The fruit is a red berry called drupes and will remain on the plant through early winter. Each fruit contains 1-5 hard seeds.

Bearberry is adapted to Northern to Artic regions in America, Asia and Europe. It likes sandy, acid soil in sun or part shade. It can be found as far south as Northern California in the U.S.

History/Folklore: Bearberry has been used as far back as the 2nd century, with cultures from around the world recommending the herb as a treatment for nephritis, kidney stones, or chronic cystitis. It has been used as general tonic. Bearberry is also used as a nutritional supplement and muscle relaxant that can soothe, strengthen and tighten irritated and inflamed tissues.

Bearberry was first documented in the mid-13th century by Welsh herbals. It was recommended for medicinal use in 1763 by the German pharmacist, Gerhard.

Legend says that Marco Polo thought the Chinese were using the herb as a diuretic.

Until the discovery of sulfa and antibiotics, bearberry was the treatment of choice for treating bladder, kidney and related infections. It is known to strengthen and tone urinary passages.

The name “uva ursi,” means “bear grapes” and comes from the fact that bears love to eat the berries. This also gave rise to the common name “bearberry.”

The leaves can also be chewed during a bladder infection to help treat the condition.

Bearberry has been used as part of protocols to treat liver and spleen problems as well as venereal diseases.

Externally bearberry has been used to treat hemorrhoids, piles, sprains and swellings. Its high tannic qualities have also helped treat cases of poison oak. The high tannic content in the leaves have led the Russians and Swedes to use the plant to tan leather.

The constituent allantoin is known for its soothing and tissue-repairing properties.

As bearberry is said to be more effective if the urine is alkaline, avoid acid foods such as fruits, juices and vitamin C when making use of this herb.

Bearberry may decrease the body’s ability to eliminate lithium, this could have serious side effects, if a person is using lithium already be sure to consult your health care provider to insure dosage.

Bearberry’s antilithic properties help it dissolve crystals not just in the kidneys, but throughout the body as well. This is why it  has been used to treat arthritis and other joint problems.

Native American Indians also used the leaves as an ingredient in smoking mixtures for peace pipes. It was believed to be calming and support mental clarity. Bearberry is an example of another herb that was becoming forgotten by Europeans and who were re-introduced to the herb by Native Americans.

Bearberry is considered a visionary herb that helps those seeking increased psychic ability.

There are several cultivars that are used as ornamental plants in gardens and to help control erosion.

Only the dried green leaves harvested in September and October are used medicinally. They need to be stored immediately so they do not reabsorb moisture form the air. The berries are taken in before the first frost.

Bearberry is solvent in both water and alcohol.

The berries are eaten by grouse, but avoided by cattle.

The glucoside arbutin found in bearberry is absorbed and excreted by the kidneys, as it is excreted it has an antiseptic effect on the urinary mucous membrane.

Different studies report that the urine from folks given bearberry is active against the most commonly found micro-organisms in bladder and urinary tract ailments.

Bearberry has been used to strengthen contractions during the labor.