Beyond basil’s well known use as a culinary seasoning, this plant has been historically used as a medicine for the body, mind, and spirit. It is considered an emblem of hatred by some and a beneficent spirit by others. It is a powerful adaptogenic herb that helps counter the symptoms of stress, including headaches, stomach disorders, chest pain, insomnia, and lethargy. Do not confuse sweet basil (Ocimum basilicum) with holy basil (Ocimum tenuiflorum). Both are in the mint family Lamiaceae sharing some similar properties and exhibiting distinct differences as well.

Watch a short video, from Ann Christensen, Founder and Creator of White Rabbit Institute of Healing™ – Did You Know, Basil Heals Hate?

Below is an overview of basil, combining the best of Western Science, Oriental Medicine, Traditional Chinese Medicine (TCM), Shamanism, Folklore, and a wide range of healing modalities. Gain a balanced and thorough understanding of the healing properties of basil.

How to take FULL advantage of Turkey Tail's healing powers! 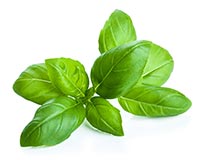 Sweet basil is a common aromatic herb in the mint family Lamiaceae. A half-hardy annual plant with many different varieties and over 160 named cultivars

Basil is Native to India, China, Southeast Asia, and New Guinea. It is now grown all over the world.

History/Folklore:​ Basil originated in India where it was cultivated for over 500 years. Because it is considered the most sacred herb, Indians call it “The Queen of Herbs.” It is often grown around temples devoted to the Hindu gods Krishna and Vishnu. In Indian, Ayurvedic medicine the herb is often used for its antiseptic properties and in China, Oriental medicine uses basil to promote blood circulation after birth and to treat kidney problems and stomach disorders.

For the Romans, it became an emblem of hatred that was associated with the scorpion.

In Greece, basil is grown around homes to help bring good luck. In Western Europe, during the Middle Ages, it was considered the devil’s herb and used in potions to protect against witches.

Sweet basil (O. basilicum) is a different species from holy basil (O. tenuiflorum). Holy basil has a more medicinal flavor and is favored by some for use in Thai cooking. It has purple stems and leaves that are floppier than sweet basil, with its slim, pointed shape leaves.

Basil has powerful antibacterial properties that can even help restrain strains of bacterial infections that are not responding to antibiotics. It is also rich in vitamin K, with one half cup containing 108% of your minimum daily allowance.

A 2004 study from Food Microbiology showed that adding the essential oil of basil or thyme in very low quantities of just 1% to water used for cleansing vegetables helped reduce the quantity of Shigella bacteria found on the food. Shigella is a bacteria that triggers diarrhea. By adding fresh basil to your salads you can help fight, counter, and reduce the impact of unwanted bacteria in fresh foods. Oral disinfectants containing basil can kill 99% of germs found in your mouth.

Boiling some fresh basil, ginger, and a bit of cardamon in water and sipping is an excellent and effective traditional remedy for treating strep and sore throats.

Basile is an adaptogenic herb that helps the body cope with stress and its symptoms from lethargy, to anxiety, to headaches, to irritability.

The compounds rientin and viceninare, found in basil are powerful flavonoids known for their ability to protect white blood cells and help prevent damage from cancer causing free radicals.

In Elizabethan times, basil was used to clear the brain, put in snuff for colds, and to accessorize the hair of young girls to indicate they were single.

In the Indian tradition, basil is sacred to Vishnu and Krishna. It is thus considered a protective plant and a beneficent spirit. A basil leaf placed on the tongue of a dead Hindu assured that he reached paradise.

How to use Basil to take FULL advantage of it's healing powers!