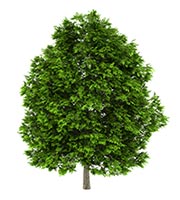 The ash tree is an important European and Chinese herb. It has a long history associating it with magic, spirits, and medicinal healing. A bitter, astringent herb it is known for treating gout, arthritis, intermittent fevers, urinary tract infections, and diarrhea. Ash trees attract lightning, so don’t stand under one during an electric storm! Ash is considered to be the sacred World Tree to the Norse, Druid and Celtic peoples. Note: Ash, Northern prickly ash (Zanthoxylum americanum), and Southern prickly ash (Fagara Clava-Herculis) are three distinct plants!

Below is an overview of Ash Tree (Qin Pi), combining and interpreting the best of Western Science, Traditional Chinese Medicine (TCM), Shamanism, Folklore and more. Gain a balanced and thorough understanding of the healing properties of Ash Tree (Qin Pi).

Ash is a tall, deciduous tree distinguished by its light-grey bark (smooth in younger trees and rough and scaly in older trees), with large compound leaves, divided into four to eight pairs of lance-shaped leaflets. Black flower-buds on the previous year’s shoots expand into small dense clusters of greenish white or purplish color. There about 50 different species of the genus Fraxinus, the Weeping and Curl-leaved ash are the best known. Ash is in the Oleaceae family of plants that include the olive and lilac family.

Ash has species native to Europe, Asia, and North America. It thrives in lowlands and moorlands.

History/Folklore: Ash bark is astringent and both the leaves and bark are used medicinally. The bark of the roots is also collected and is considered the most astringent. Ash bark is used as a bitter tonic, astringent, and antiperiodic.

The leaves are gathered in June, well dried, powdered and kept in well sealed jars. The fruits, called the Keys, will keep for a year if gathered when ripe.

Dioscorides said, “The leaves of the tree are so great they can be used against serpents….” Many old superstitions are connected to ash trees. They have been said to cure warts and other ailments brought on by witches and evil spirits. An ancient Greek creation story says humans were formed from Ash and Oak trees.

In China the bark is typically stripped from the tree in spring and autumn. As a medicine it is used dried and raw. A wax deposited by an insect on the Chinese ash is used to coat pills.

Ash Tree (Qin Pi) has been used in Traditional Chinese Medicine for over 2,000 years and is referenced in one of the first texts of Chinese medicine, The Divine Farmer’s Materia Medica.

The compound esculetin found in the bark is sedating, antitussive, anti-inflammatory, anticoagulant, expectorant and antiasthmatic. It is also a coumarin derivative showing chemopreventive and chemotherapeutic abilities. It is being studied for its usefulness in treating diabetic complications.

Ash is an exceedingly valuable timber tree. It is tough, highly elastic and grows quickly. It can take a high polish and bends well when seasoned. The timber is so elastic that it will bear more weight before it breaks than any other tree. It matures more rapidly than oak, and was often in demand for railway and carriage building. It is the second most important wood for the construction of airplanes, after spruce.

Ash is a symbol of mastership and power. The leaves are said to attract love and prosperity. If you sleep with them under your pillow you will have psychic or prophetic dreams. Ash is used to cure loneliness of the human spirit. Ash, Oak and Hawthorn make up the triad of powerful fairy trees. Stand near ash and the fairies will leave you alone.

Three of the Five great trees of Ireland were Ash: the Tree of Uisnech, the Tree of Tortu and the Tree of Dathi. These trees were the guardians who protected the sovereignty of the land. The Celts themselves destroyed them in 665 CE rather than let the encroaching Christians have access to them.

Ash is an important symbol in Norse mythology. It is called Yggdrasil, and is Norse World Tree called the Cosmic Ash. It is said to span the universe and have roots that delve deep into the earth. The ancient Druids said the Ash spanned the world around us and was within each of us. Druid wands were made of ash because of its straight grain. They were used for healing and general magic.

Preserved in Salt and Vinegar

Preserved in salt and vinegar, ash leaves were pickled and used in sauces and salads.

Several ash species exude a nutritious sap called, “manna,” used as a laxative for children and pregnant women. It also helps soften stools for those suffering from hemorrhoids or post-rectal surgery.