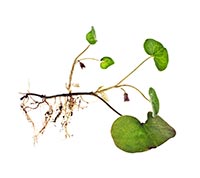 Aarum (Asarum canadense) is commonly called wild ginger because its rhizomes taste and smell like ginger root (Zingiber officinale), though the two plants are not related. This is an herb that both Eastern and Western herbalists learn about due to its long history as a respected healing herb. Among its many applications it is excellent for treating congested coughs, asthma, pneumonia, and liver disease. The root has been safely used for centuries but recent research has found that the aerial parts of asarum can contain the banned compound aristolochic acid in very small amounts but which has been connected with renal failure in some particular cases. Don’t confuse asarum with milkwort (Polygala amara) or senega (Polygala senega), as all three are sometimes called by the same common name, snakewood.

Below is an overview of Asarum (Xi Xin), combining and interpreting the best of Western Science, Traditional Chinese Medicine (TCM), Shamanism, Folklore and more. Gain a balanced and thorough understanding of the healing properties of Asarum (Xi Xin).

Asarum is a low-growing plant in the birthword or Aristolochiaceae family. They have kidney-shaped leaves, growing from creeping rhizomes, and bear small, axillary brown or reddish flowers. The flowers are jug-shaped and are born singly in spring between the leaf bases. Two leaves emerge each year from the growing tip.

Asarum is native to the Northern Hemisphere, with most species found in East Asia and North America, and one species native in Europe. Asarum prefers moist, shaded sites with humus-rich soil.

Caution: Caution is advised. Possibly safe when used orally, or for a short-term, and is not contaminated with the compound aristolochic acid which in particular, asarum (Asarum canadense, A. europaeum) has been found to contain. It is not entirely clear what amount or circumstances of the herb are required to trigger the toxicity but this compound has been linked to possible renal failure and possibly cancer. Varieties of this herb can also cause vomiting. The root has been used by women to start their menses. This function could cause an abortion, be careful using if pregnant.

The Chinese herb asarum root (A. sieboldii, A. heterotropoides) has not been found to contain aristolochic acid. If you are not clear which herb or which part of the herb you are using, or the dosing, or the conditions that can be a precursor for possible renal failure, caution is advised. Some traditional sources also suggest this herb may antagonize Fructus Corni Officinalis (Shan Zhu Yu) and Radix Astragali Membranacei (Huang Qi) and counteracts Talcum (Hua Shi).

Not recommended for any person with existing renal problems.

History/Folklore: Asarum (Asarum canadense) is an herb that can be seen on almost any herb walk in Northern U.S. or Canada. It has a long history of use by Native Americans and has been used in Oriental medicine for thousands of years. It is an herb that is known and taught early to both Western and Eastern herbalists. In China, it is best known for its ability to treat sinusitis, coughs with phlegm, arthritis, and toothaches.

Native Americans prepared infusions and decoctions using the rhizomes to facilitate menses and in order to regulate an irregular heartbeat. They would also crush the rhizomes and pour the liquid into the ear to help relieve ear aches.

Early settlers made a tooth powder that included asarum, and it may have likely been a recipe shared with them by the Native Peoples. They also used the roots to make candied rhizomes and syrups as a substitute for ginger root (Zingiber officinale) to treat stomach cramping, and flatulence.

According to the “doctrine of signatures,” the plant’s kidney-shaped leaves suggested the plant was useful for treating kidney disorders. Other early effective uses of the plant included using it to relieve fevers and induce sweating. Its common name, Canada snakeroot, derives from the root being used to treat snakebite.

Preliminary reports suggest that asarum root (A. sieboldii, A. heterotropoides) in vitro has shown inhibitory effect against Streptococcus, Shigella, and Salmonella typhi.

In 2000, the US FDA (Federal Drug Administration) declared the compound aristolochic acid, which is found in various amounts in the differing varieties of asarum, banned due to its potential to cause renal failure. This same compound is also known to be immune enhancing. However, the compound was banned and as asarum contains this compound in small amounts the herb came under scrutiny and fell into disfavor despite thousands of years of safe use.

It is important to remember that Isolated compounds and their synthetic derivatives can be unsafe especially if they lack nature’s special balance of compounds that are found to exist within all plants, wherein the whole herb can be healing while an isolated compound may not be. Despite contradictory data about the incidents of renal failure, the compound needs more study to confirm dosage, combinations, and pre-existing conditions that might make a person susceptible to renal failure when exposed to this compound. Safety is always important.

Asarum (Asarum canadense, A. europaeum) contains other active ingredients besides aristolochic acid, which only plays a small part in the plants overall composition. However, as no final determination has been made as to what amount of aristolochic acid might be toxic and what amount is safe, and despite years of asarum being used safely, the incidents of renal failure caused by aristolochic acid have rightly called the compound and plants that contain it into question.

The European variety acts as an emetic (promotes vomiting) and is also cathartic. It is also sometimes called asarabacca.

The Chinese herb asarum root (A. sieboldii, A. heterotropoides) has not been found to contain aristolochic acid, the compound that was banned due to possible connections with causing renal failure. The aerial parts of the plant do contain small amounts of the banned compound. Either way, you still need to be careful about your source of asarum and make sure it is not contaminated with this banned compound.

Also prior to the compound being banned, many vendors (Western or Eastern) blended varieties of asarum to produce medicines. In most cases this was fine, and caused no problems in the hands of experienced healers following proper dosing and being knowledgeable about what varieties of plants they were using. However, now that the compound has been banned you need to be careful to make sure you know your source and are clear about what you are taking. All varieties are named asarum, and the family to which these plants belong to is noted for containing some amount of aristolochic acid, the isolated compound that is at issue. That said, as in the West, asarum has been revered in Oriental medicine as a diuretic, anti-inflammatory, and its ability to ease birthing.

Typical dose of Chinese asarum root (A. sieboldii, A. heterotropoides) is 1-3 g and while the whole plant has been typically used, as the roots have not been found to contain the banned compound, avoid using the aerial parts to be safe. In Oriental medicine, the powder is often applied directly to an affected area for nasal congestion (snuffing it up the nose) and for oral problems, such as toothaches. Used topically, the powder can be mixed with water and glycerine and be applied to the naval (for a minimum of three days) to ease oral lesions. It is also recommended as an effective pain killer despite its warming properties and can be combined with other herbs to help relieve pain. (Do not use doses over 5 g per day or it can become toxic.)

The botanical name, asarum, derives from the Latin word meaning altar or sanctuary.

Good quality asarum (Xi XIn/A. sieboldii, A. heterotropoides) has a greyish-yellow root and green leaves that are acrid and make the tongue slightly numb.