The globe artichoke (Cynara cardunculus) is not to be confused with the Jerusalem artichoke (Helianthus tuberosus, aka sunchokes) or Chinese artichoke (Stachys affinis, aka crosne or knotroot). Globe artichoke is a highly nutritious food, famous for its antioxidant and dietary fiber content. The leaves are commonly made into extracts used to stimulate the flow of bile from the liver which helps relieve heartburn and alcohol “hangovers.” Artichokes are an excellent liver tonifying food and medicine.

Watch a short video, from Ann Christensen, Founder and Creator of White Rabbit Institute of Healing™ – An Often Overlooked Benefit of Artichokes…

Below is an overview of artichoke, combining the best of Western Science, Oriental Medicine, Traditional Chinese Medicine (TCM), Shamanism, Folklore, and a wide range of healing modalities. Gain a balanced and thorough understanding of the healing properties of artichoke.

How to take FULL advantage of Artichoke's healing powers... 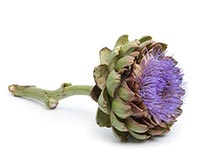 JOIN ME in an exploration of the healing herb, Artichoke (Yang Ji). Dive deep into the benefits and applications of Artichoke, from Eastern and Western perspectives, and so much more!

Globe artichoke belongs to the thistle family (Asteraceae). Chinese artichoke is a perennial root vegetable in the mint family. Globe artichoke has arching, deeply lobed, silvery-green leaves and beautiful light pink or purple flowers with large heads developing from the edible buds. The bud is composed of compactly arranged triangular scales in a whorl-fashion around a center “choke.” The plants can grow to be over three feet tall.

Native to the Mediterranean, globe artichoke is now cultivated in many other areas of the world. In the U.S. nearly 100% of artichoke cultivation is found in Monterey County, in the town of Castroville, claiming to be “The Artichoke Capital of the World.”

History/Folklore: The globe artichoke (Cynara cardunculus) should not be confused with the Jerusalem artichoke (Helianthus tuberosus, aka sunchoke or wild sunflower roots) or with Chinese artichoke (Stachys affinis, aka crosne, chorogi, or knotroot). There are over 140 different varieties of artichoke, with only 40 grown commercially to be sold as food. The edible parts of the artichoke are the leaves and the “heart” which is actually the bud of the artichoke flower.

Artichokes contain more antioxidants than dark chocolate, blueberries or cranberries. They are higher in dietary fiber than beans, peas, or oats, making them an excellent food for improving digestive health and maintaining regular bowel movements.

The Ancient Greek and Romans recommended them as a medicine and healthy food. According to legend the Greek god Zeus turned his object of affection into a thistle, the family of plants that artichokes belong to. Despite their prickly appearance they used the plants as an aphrodisiac, diuretic, breath freshener and deodorant.

In Ethiopia, artichoke leaves are often used to relieve dyspepsia or indigestion.

The Dutch introduced artichokes to England, where they grew in the garden of Henry VIII’s home in Newhall.

Spanish immigrants brought them to California in the 19th century.

In China, globe artichoke (Cynara cardunculus) is also enjoyed as a food and medicine, but Chinese artichoke (Stachys affinis) is the more commonly used plant. Chinese artichoke is a perennial herbaceous plant, native to China whose rhizomes and roots can be eaten as a root vegetable. The tubers are pale beige to ivory-white in color and full of convulsions and indentations. They are harvested in the fall season.

These tubers have a nutty flavor, and can be boiled and sauteed as a side dish. In China and Japan they are primarily pickled. The Chinese artichoke exhibits antimicrobial, antioxidant, antitumor, and anti-anoxia properties that support immune function, heart, health, and prevent stomach ulcers. In Japan and China, the plant’s tubers are popularly pickled.

Artichokes are low in calories. A medium sized artichoke contains only 60 calories and is super high in antioxidants and dietary fiber. The high dietary content not only improves digestion, but helps aid the body to naturally detox, fighting off the dangerous visceral fat that accumulates around your organs and leads to various diseases, including obesity, diabetes, and heart-related illnesses.

Artichoke makes the top 10 list for foods rich in antioxidants, helping to prevent cancers and prevent inflammation that can cause aging, heart and other disorders. It is considered to have the highest level of antioxidants of any vegetable. The powerful antioxidant silymarin found in artichoke has been shown to positively influence liver health, boosting liver function by stimulating cell regeneration and clearing free radicals from the system.

Artichoke boosts the production of digestive bile and nourishes the digestive tract. Artichoke leaf has been shown to relieve the symptoms of irritable bowel syndrome, constipation, diarrhea, bloating, and upset stomachs. 1 teaspoon of liquid extract mixed with water, or 15-30 drops of tincture taken 3x per day is a typical dose for treating stomach disorders.

Artichoke leaves are dried whole or cut before being used in herbal remedies. They are available in dried, powdered, extract, and tincture forms.

Artichoke is the primary flavor in the 33-proof Italian liqueur called Cynar, produced exclusively by the Campari Group as an aperitif served over ice, or mixed with orange juice.

The name artichoke derives from the word ciocco, meaning “stump”.

Artichokes are a symbol of peace, hope, and prosperity.

The constituent cynarin found in artichoke, inhibits the taste receptors, making water, and other foods and drinks, seem sweet.

Wild artichokes can still be found in some parts of North Africa.

“Artichoke Tea” is a commercial product of Vietnam and Romania. The flower can be steeped in boiling water for a tea called “alcachofa” made in Mexico.

How to use Artichoke (Yang Ji) and take FULL advantage of it's healing powers!