Argan oil is derived from the kernels of the argan tree, native to Morocco. The oil has a nutty flavor and is commonly used to dip bread in, on pasta, or as an ingredient in cosmetic products for the face, lips, skin, and hair. It is full of nutritional value, antioxidants, and anti-inflammatory properties. New research indicates it may help prevent chronic diseases such as heart disease, diabetes, and cancer.

How to use Argan and take FULL advantage of it's healing powers! 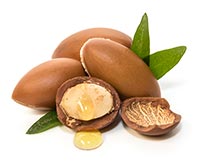 The fruit of the argan tree is small and round or conical. A thick peel covers a fleshy pulp that surrounds a hard-shelled nut. The leaves are green in spoon to elliptical shape. The trees flowers are yellow.

The argan tree is native to Morocco. They thrive in the arid and semi-arid deserts of southern Morocco.

History/Folklore: The argan nut can contain one to three oil-rich kernels. Extraction will yield 30-50% of the oil with each dried fruit producing about one litre of oil. The remaining crushed kernels are protein-rich and used to feed cattle. The nutrient-rich oil has become so popular that production in Morocco is being increased with mechanically derived oil being developed to help lower costs.

Aproximately 35% of the fatty acid content of argan oil is from linoleic acid, or omega-6. About 45% of the oil is made up of oleic acid (aka: monounsaturated omega-9), which is also found in olive oil and is renowned for its heart healthy properties.

A study of postmenopausal women showed using argan oil topically led to a significant increase in skin elasticity after daily use for 60 days. When the oil was also taken internally results were further improved.

A 2016 study, in Ostomy Wound Healing, indicated that in rats suffering from second-degree burns, those treated topically with argan oil healed faster than those treated with the standard silver sulfadiazine, a standard burn cream.

Argan oil will keep on the shelf for up to two years if kept out of the sun and longer if refrigerated.

The argan tree was deemed so beneficial to the environment that Morocco’s argan forest was declared a Biosphere Reserve by Unesco in 1998. The argan tree is a source of food, shelter, and protection from desertification. The tree has deep roots that help prevent the encroachment of the desert and soil erosion. Its leaves and fruit help provide feed for animals and jobs to the local women who are typically responsible for harvesting and making the by-hand oil that is derived from the trees kernels.

Besides being loaded with important fatty acids that are known to help improve and support skin health, argan oil is also very high in vitamin E, known for supporting skin, eye, and hair health.

As the process for making argan oil is long and expensive, some argan oil may be diluted with less expensive sunflower oil. It can be difficult to find pure argan oil.

The large worldwide cosmetic company, L’Oreal, has pledged to continue sourcing its oil from small hand processed co-operatives in support of local agriculture and fair trade.

How to use Argan to take FULL advantage of it's healing powers!