Originally from China, apricots are now found worldwide. Considered one of the healthiest fruits in the world, it is loaded with nutritional and medicinal value. An apricot a day can also help “keep the doctor away.” Apricots are packed with Vitamins A and C, minerals, fiber, and antioxidants that support eye, skin, heart, and digestive health. Apricots are low in calories and help regulate blood sugar levels. The Chinese have used the kernels for thousands of years to treat lung disorders and constipation.

Watch a short video, from Ann Christensen, Founder and Creator of White Rabbit Institute of Healing™ – What about the pits? 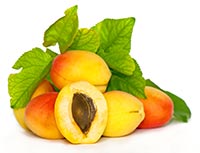 Apricots are small golden orange fruits with velvety skin and flesh. Apricot trees are medium-sized deciduous trees that grow best in well-drained mountain slope soils. They bear pinkish-white flowers and the fruits are a drupe, with a centrally located single pit surrounded by aromatic edible flesh. The seed enclosed inside the hard stony shell is called a “stone.” They flower in early March.

Originating in China, apricots have also had a long history of cultivation in Armenia. They are native to continental climate regions with cold winters and dry climates.

History/Folklore: The polyphenolic antioxidants and flavonoids found in apricots help protect against heart disease and the carotenoids and xanthophylls help protect your eyesight from age-related damage. The catechins found in apricots help prevent inflammation, a leading cause of many ailments, including protecting blood vessels from inflammation-related damage.

The high levels of vitamin A and C help build your immunity and protect your eyes and skin from diseases caused by aging.

The retinol in apricots is fat-soluble, meaning the fruit dissolves easily in your digestive tract, making it easier for its nutrients to be absorbed by your body.

Apricot’s fiber and potassium content help balance electrolyte levels that support your heart muscles as well as increase the amount of good cholesterol while reducing the levels of bad cholesterol (LDL). Apricots are also good for preventing anemia.

The Persians and Armenians have been cultivating apricots since very ancient times. They were said to have grown in India as far back as 3000 B.C. Dried apricots play an important role in Iran’s global trade.

In China, the famously long-lived Hunza people of the Himalayas have diets rich in apricots. It is one of their staple foods. They eat them raw and dried and use the pits for oil and medicine. The hard shells are used to fuel fires.

In Traditional Chinese Medicine, the fruit pits (AKA seeds or mature kernels) are used as a medicine to treat coughs, wheezing, and moisten the bowels.

The constituent, amygdalin, found in the kernels reduces the incidence and severity of coughing. It can also be slightly toxic as it generates hydrocyanic acid. This slightly toxic substance is found in the superficial skin and tip of the kernel. The process of preparing the kernels removes the toxicity. The cancer-fighting drug “Laetrile” is produced from amygdalin. However, apricot kernels are not yet recommended as a cancer treatment or preventive in either China or the West. The amounts of this constituent that are needed to help prevent cancer would be too high and lethally toxic.

The fruit can be eaten without having to peel off the outer velvety skin.

The fruit can be distilled to make brandy and liqueurs, including the Italian liqueur, Amaretto (a name that means “bitter love.”)

Apricots traveled from China through Armenia to Europe and were then brought to the United States. California is the largest producer of apricots in the United States. The ancient Greeks called apricots, “Golden Eggs of the Sun.”

The Chinese associate apricots with education and medicine. They can also be a symbol for a beautiful woman, good fortune, and spring.

The essential oil from the kernels is sold commercially as bitter almond oil.

Dried apricots were an important commodity on Persian trade routes.

How to use Apricot / Apricot Kernel (Xing, Xing Ren) and take FULL advantage of it's healing powers!