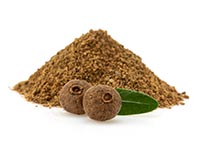 Widely used in Mexican and Central American cuisines, allspice is a dried “unripe” fruit from the pimento tree that is known for its pain relieving, mood enhancing, antifungal, and anti-inflammatory properties. It is also an excellent herb for improving digestion and increasing circulation.

Allspice is the dried “unripe” fruit (pimento corns) from an evergreen tropical shrub belonging to the Myrtle (Myrtaceae) family, of the genus pimento. The tree can grow from 22-43 feet tall. The plant begins to yield fruit after about five years of growth.

Allspice is native to Central America, Mexico, and the Caribbean Islands. The trees are now cultivated throughout the world, but only thrive in warm climates, almost entirely in the Western Hemisphere.

Caution: Considered safe, but do be careful of not overusing if you are already suffering from gastric ulcers or ulcerative colitis.

History/Folklore: Native to the Caribbean, Southern Mexico, and Central America, it was brought to Europe in the 16th century by the explorer Christopher Columbus from his voyage to the island of Jamaica.

New research confirms that a traditional preparation of allspice oil, garlic extraction and oregano helps combat E.coli, Salmonella and L. monoctyogene infections. When applied to certain foods allspice helps neutralize bacteria levels before they can enter your system and cause harm.

The combination of eugenol, quercetin, tannins and other chemical compounds give allspice potent antioxidant properties. These properties are further enhanced by the high levels of vitamin C and A also present in allspice.

The unripe green berries (pimento corns) are picked from the pimento trees when they reach full size. Ripe berries are also cultivated. Both the ripe and unripe berries are then placed in the sun to be thoroughly dried. They can then be powdered or used for their essential oil. The dried shriveled berries look like brown peppercorns. Unlike peppercorns, which contain only one seed, allspice contains two seed. The herb’s aroma and taste resembles a mixture of nutmeg, black-pepper, cloves and cinnamon which led to it being named “allspice.” The name “pimento” derived from the Spanish word, “pimenta” for peppercorn as they mistakenly thought the fruit was a pepper.

The essential oil made from allspice is a tonic for the nervous system and has been used to treat nervous exhaustion, hysteria, neuralgias and convulsions.

Allspice has also been used as an ingredient in deodorants and toothpastes.

The outer coat of the berries contains the highest concentration of the medicinally important compounds. The pimento corns can be stored at room temperature for many months and milled as needed. Once powdered, allspice needs to be refrigerated in airtight containers to maintain the effectiveness associated with the spices essential oils which evaporate easily upon being ground and powdered.

The fresh dried leaves, called “West Indian Bay Leaf” in the Caribbean, are used similarly to the bay leaves they resemble in texture. Similarly to bay leaves, they are infused in soups and stews and then removed before serving. The leaves are also used for making jerky.

Important to Caribbean cuisine allspice berries and leaves are used in moles, pickling, sausage, jerky seasoning (where even the wood is used for smoking the meat) and in curry powders. In the United States the herb is mostly associated with desserts and as a secret ingredient for use in chili. The British also use the spice as an ingredient in cakes.

In the 1800’s, the wood was used to make walking sticks and umbrellas which led to over-harvesting and almost extinction. The leaves and wood have often been used to smoke meats.

There are only five calories in a single teaspoon of allspice.

The phenol eugenol in allspice is the active constituent used by dentists as an antiseptic and local anesthetic for teeth.