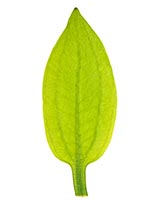 Below is an overview of Alisma, combining and interpreting the best of Western Science, Traditional Chinese Medicine (TCM), Shamanism, Folklore and more. Gain a balanced and thorough understanding of the healing properties of Alisma.

Alisma is a genus of flowering plants in the family Alismataceae, commonly called water-plantains. They are aquatic plants with leaves that are either floating or submerged. The flowers are white with a pale pink or pale lilac tinge. They are hermaphrodite and arranged in panicles, racemes, or umbels. Alisma is a perennial plant, with broad leaves that can be tapered or rounded at the base. It will reach full height in 2-5 years.

Alisma is found in still water habitats around the world from wetlands, saturated soils, marshes, wooded swamps to flooded farmlands.

Caution: Long term use can irritate the intestinal tract. Fresh root and leaves are toxic.

History/Folklore: In classic Chinese texts, alisma is prescribed as an adjunctive herb for wasting and thirsting disorder. While there are several subspecies of plantain around the world, they all have similar medicinal uses. The leaves can be used externally to treat bruises and swellings. It is commonly used in China in preparations to improve kidney balance and general health. In Japan and China, the herb is often combined with antibiotics to treat kidney infections without any negative interactions.

Ancient Taoist Chinese texts say that if “taken for a long time, the eye and ear become acute, hunger is not felt, life is prolonged, the body becomes light, the complexion radiant, and one can walk upon water (a reference to spiritual powers as well as the plants habitat in watery areas).”

The plants pungent, volatile oils are said to be the source of its medicinal attributes. Alisma is known to lower blood lipids, cholesterol levels and blood sugar levels. Used topically it can inflame and sometimes even blister the skin.

According to the Flora of Pakistan, the powdered root has been used as a cure for hydrophobia, the fresh leaves are used in homeopathy and the starch-rich root stock is eaten in many countries.

The word “plantago” is the Latin for “sole of the foot,” referring to the plant’s flat leaves.

The nineteenth century British art and social critic, John Ruskin believed the curve of the plants leaf-ribs were a model of “divine proportion” and helped shaped his Theory of Gothic architecture, which was based on the use of natural forms.

The roots are harvested before the plant blooms and are dried for future use. The fresh root is toxic. The seeds can be powdered and used as an astringent in cases of bleeding.

When introduced to an area, they can rapidly reproduce. The flowers open late in the afternoon and close again at dusk. It is often grown as an ornamental in water gardens.

Preliminary studies indicate that alisma has the endocrine effect of lowering serum glucose.

Fresh alisma root and leaves are toxic. Heating and drying the herb deactivates the poisonous compounds in the root.