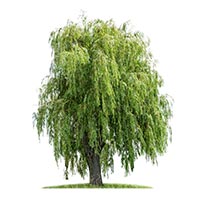 All willow tree species behave like aspirin and are mainly used to cool and relieve pain. The bark is excellent for treating chronic inflammation, infection, and pain. In 1763, Reverend Edward Snow (1702-68) discovered salicin in willow bark. It is the active ingredient now used in asprin. Salix alba,‘Caerulea’ is a specially grown species of willow found in Britain that is used to make bats for playing the game of cricket. Remember, willow tree (Salix alba) is not willowherb (Epilobium augustifolium). Willow bark has been used for thousands of years as an effective treatment for aches, inflammation, fevers and pain.

There are around 400 species in the Salix genus. Common Willow species are: White Willow (Salix Alba), Black Willow/Pussy Willow (S. Nigra), Crack Willow (S. fragilis), Purple Willow (S. purpurea) and Weeping Willow (S. babylonica). All have a watery bark sap, slender branches and large fibrous roots, which are remarkable for their toughness, size and tenacity to life. Leaves are typically elongated, but may also be round to oval, frequently with serrated edges. Most species are deciduous. Male and female flowers appear as catkins, often appearing in early spring before the new leaves appear or open.

Willows are native to China, with the tree now planted across the Northern Hemisphere. They are usually found in temperate areas where they thrive in very moist soils, usually near a body of water. Though there are arctic and alpine species as well.

History/Folklore: Willows all have abundant watery bark sap, which is full of salicylic acid.  Aspirin was developed in the 1800’s from the plant’s constituent salicin. While Aspirin works more quickly than white willow, white willow’s effects are believed to last longer. Aspirin gave rise to the important class of drugs known as non-steroidal anti-inflammatory drugs.

Hippocrates reported that people chewed on willow bark to relieve pain and fever. It was particularly used to treat low back pain and osteoarthritis, including tendinitis and bursitis.

Ancient texts from Assyria, Sumer and Egypt mention willow bark as a remedy for aches and fever. Native Americans used it as a staple in their medical treatments. The Pomo Indians of California boiled the inner bark and drank the resulting tea to promote sweating in cases of chills and fever. In the 1700’s, it was enormously popular with colonial Americans as a treatment for fevers.

It is that the poet Alexander Pope begged a twig from a parcel tied with willow twigs sent from Spain to the Lady Suffolk. He planted it and it thrived. Legend holds that all of England’s weeping willows are descended from this first planting.

Willows are often planted on the borders of streams so their interlocking roots may protect the bank against erosion. Frequently the roots will grow larger than the stem which grows from them. Willow roots can spread widely and are considered very aggressive in seeking out moisture. Their roots are notorious for clogging drains, septic systems, and sewer systems. Willows are hosts to more than a hundred aphid species.

Willow is listed as one of the 38 substances used to prepare Bach Flower Remedies, an alternative medicine. White, Black and Crack Willow species produce the highest amounts of salicin and are often used together.

Willow is also grown for biomass or biofuel. It has a high energy in-energy out ratio, large carbon mitigation potential, and fast growth.

Willow is one of the “Four Species” used ritually during the Jewish holiday of Sukkot.  In Buddhism, a willow branch is one of the chief attributes of Kwan Yin, the Bodhisattva of compassion.  Willow branches are often used instead of palm branches in Christian churches in Europe and the Ukraine on Plam Sunday.

Willow is used to make charcoal for drawing and its branches are often used in living sculptures as well as in the making of baskets and fences.

In Britain, Salix alba ‘Caerulea’ is a specially grown species of willow used to make bats for the popular game of cricket.

The craft of weaving with willow branches is rooted in the Celtic traditions.

Ludwig von Beethoven died of salicin overdose, the key ingredient in willow bark, his autopsy reported a particular kind of kidney damage that is caused by salicin, especially when it is taken or mixed with alcohol.