Schisandra is considered one of the great longevity tonic herbs. It is famous as an adaptogen and anti-aging herb, with stamina building properties. It is also known to impart beauty and sexual endurance to those who use it regularly.

Below is an overview of schisandra, combining and interpreting the best of Western Science, Oriental Medicine, Traditional Chinese Medicine (TCM), Shamanism, Folklore, and a wide range of healing modalities. Gain a balanced and thorough understanding of the healing properties of schisandra.

How to use Schisandra and take FULL advantage of it's healing powers! 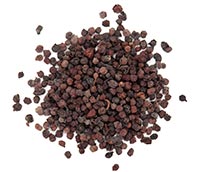 Schisandra is a deciduous woody vine in the Magnoliaceae family. There are 25 It is dioecious, thus flowers on a female plant will only produce fruit when fertilized with pollen from a male plant. There is a hybrid called “Eastern Prince” which is self-fertilizing. Similar to grapes, it likes some shade, as well as moist, well-drained soil.

Native to Northern China and Eastern Russia. It is now grown in many place in the world including Japan, Korea, and North America.

History/Folklore: Schisandra’s Chinese name, “Five Flavors,” derives from it being one of the few herbs to include the properties of all five Flavors (Sweet, Bitter, Salty, Sour and Pungent). Its main taste is sour and salty. Because it has five tastes it is considered to benefit all five yin organs; Liver, Lung, Heart, Kidneys and Spleen. Another way of considering their Five Flavors is to note that their shells are sweet, their meat sour, their seeds bitter and tart, and their extract salty.

Low doses of schisandra are said to stimulate the central nervous system, while higher doses are used to depress, or calm, the nervous system.

In the Far East regions of Russia the berries have been used by the native Nanai hunters to improve night vision and as a tonic to reduce hunger, thirst and exhaustion.

Schisandra has been used to help respiratory depression caused by morphine use.

Schisandra increases the livers ability to make the enzyme glutathione peroxidase. This compound deactivates several types of free radicals that attack the outer membrane of liver cells. It helps to counter the damage done to the liver by chronic viral hepatitis and HIV. Schisandra also contains lignans that are known to have a strong protective action on the liver. Schisandra also increases the flow of bile.

A study of 47 premenopausal and 49 postmenopausal women not using hormonal contraceptives and a second group using hormone replacement therapy (HRT), found a significant decrease in estrogen that might lead to breast cancer. Schisandra contains a phytoestrogen compound associated with lowering the risk of breast cancer.

It has been favored by the wealthy and especially the emperors and court ladies due to its reputation as a youth preserver, beautifier and powerful sexual tonic. In Oriental medicine it is considered both a Yin and a Yang tonic. It is famous for increasing the sexual power in men.

As the plant is not native to the west, it has little European historical usage, but with current growing scientific studies being made it is now being used more and more outside of China. Research done in Russia, led to the herb being one of the first to be identified as an “adaptogenic” herb. The term was created to describe the herbs ability to systemically promote health by countering the symptoms of stress, boost immunity, support organ and system functions, as well as build stamina and strength. Research has continued to confirm the herbs potent protective and rebalancing effects on the central nervous system, endocrine, immune, respiratory, cardiovascular, and gastrointestinal systems.

The young spring leaves can be boiled and enjoyed as a vegetable side dish.

Widely used to beautify the skin and protect it from sun and wind damage.

As the plant contains tannins it is best soaked in pure water for at least several hours before using, otherwise it can upset a person’s stomach or digestion.

Drink a cup of Schisandra tea daily for 100 days to cleanse the blood, beautify the skin and build sexual energy.

How to use Schisandra to take FULL advantage of it's healing powers!