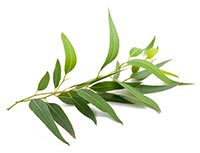 Eucalyptus can be used as an insect repellant, an expectorant, and a mouthwash. Used by the Aborigines to heal wounds it is also a tree that has been used to transform swampy environments infested with malaria into habitable neighborhoods.

Below is an overview of eucalyptus, combining and interpreting the best of Western Science, Traditional Chinese Medicine (TCM), Shamanism, Folklore and more. Gain a balanced and thorough understanding of the healing properties of eucalyptus.

Want to Find Out More about Eucalyptus?

Take full advantage of the healing power of Eucalyptus (An Shu and An Ye). What does Eucalyptus treat? Find out what you DON’T know about how and why Eucalyptus works. Find Out More…

Pin Yin: An Shu (whole tree) and An Ye (leaf only)

About 300 species, the leaves are leathery in texture and are studded with glands containing fragrant volatile oil. The flowers in bud are covered with a cup-like membrane. The trees grow quickly and reach a great height, some as tall as redwoods. The lower bark is rough, grayish or brownish, the upper bark smooth, pale and with a bluish tinge, decorticating in long strips. Indigenous to Australia and Tasmania. Thrives well in many environments, but will not endure a temperature of less than 27 degrees Fahrenheit.

Parts Most Frequently Used: Oil of the Leaves, Leaf

History/Folklore: The name of the tree derives from the Greek word “eucalyptus” meaning well covered in reference to the trees membrane covered flowers. Known to be used by the Australian Aborigines to heal wounds and fungal infections. They refer to it as “malee.” It is the main food for the Koala Bear. Some seeds, having been sent to France in 1857, were planted in Algiers and thrived exceedingly well. Trottoir, the botanical superintendent, found that the value of the fragrant antiseptic exhalations of the leaves in treating fevers associated with marshy districts far exceeded the amazingly powerful drying action of the roots on the soil. Five years after planting the eucalyptus, one of the most marshy and unhealthy districts of Algiers was converted into one of the healthiest and driest. As a result, the rapidly growing eucalyptus trees are now largely cultivated in many temperate regions with the view of preventing malarial fevers. The essential oil of eucalyptus used in medicine is obtained by aqueous distillation of the fresh leaves. The ingredient of ‘catheter oil’ is used to sterilize and lubricate urethral catheters. In 1890, eucalyptus was introduced into China by the Italians and the French as an ornamental tree. China now has the second largest planting of eucalyptus in the world. Eucalyptus is used in Ayurveda for its expectorant and topical applications to relieve headaches due to colds.

The oils from each species can vary wildly in function and properties. Essentially there are three main types of oils: medicinal, industrial and aromatic.

Used in veterinary practice, the oil is administered to horses to treat influenza and in dogs to treat distemper.

Eucalyptus is one of the best-known cold remedies.