Elderberry has a long and distinguished history in Europe and the West as a medicine, beverage, and for protection against evil spirits. High in antioxidants and vitamins that help boost your immune system and reduce inflammation, elderberry is often recommended for preventing and treating cold and flu symptoms, protecting your heart and reducing the impact of stress.

Watch a short video, from Ann Christensen, Founder and Creator of White Rabbit Institute of Healing™ – Elderberry, the “Elder” Plant.

Below is an overview of elderberry​, combining the best of Western Science, Oriental Medicine, Traditional Chinese Medicine (TCM), Shamanism, Folklore, and a wide range of healing modalities. Gain a balanced and thorough understanding of the healing properties of elderberry.

How to take FULL advantage of Elderberry's healing powers... 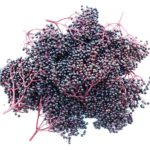 JOIN ME in an exploration of the healing herb, Elderberry (Jie Gu Mu)​. Explore the benefits and applications of Elderberry, from Eastern and Western perspectives, and so much more!

There are 5-30 species of this shrub or small tree found in the moschatel family, Adoxaceae. It is native to subtropical regions both in the northern and southern hemispheres. Fast growing, the trees bear large clusters of small white cream-colored flowers in late spring, followed by clusters of small blue-black or red berries in late summer.

Elderberry is native to Europe and large areas in North America, especially east of the Rocky Mountains, though it is now found in many parts of North America and grown throughout the world. It likes moist, well-drained soil found in openings of forest habitats.

Caution: Considered safe when cooked and used in proper doses. Unripe fruit or uncooked berries or flowers may cause nausea or diarrhea. The tree’s bark, roots, leaves, and seeds are all toxic as they contain a type of cyanide.

History/Folklore: Elderberry fruit has long been considered a virtual cure-all with the ability to treat a wide variety of ailments and conditions. Hippocrates, the “Father of Medicine,” called the tree his “medicine chest.” Among its many attributes, elderberry is commonly used as a gentle, effective remedy to help prevent and fight viral and bacterial infections, especially cold and flu symptoms, such as fevers, coughs, headache, muscle aches, congestion, nausea, irritability, and wheezing. It was even used in the 1995 flu epidemic in Panama.

Native Americans regarded elderberry as an “Elder” plant. It was used to treat infections and as a tonic herb to promote health and vitality. They dried the berries for use during the winter and also used them to make a deep black dye for basket making. The flowers were also used to help ease the pain associated with rheumatism, sprains, and muscle aches. A poultice made from the flowers was applied externally to tone and soften skin and heal wounds. The trees were often grown near living areas for convenience and near graveyards.

The ancient Egyptians used elderberry to improve their complexion and heal burns.

Elderberry has been used for hundreds of years to ward off evil and protect against witches. It was said you would be cursed if you cut or burned down the “elder mother” as she would be released and take her revenge on you.

St Germaine French liqueur is made from elderberries as is Swedish aquavit.

Studies have confirmed that elderberry helps boost the production of cytokines. Cytokines are the protein messengers that help regulate the immune response. The anthocyanins found in elderberries possess more antioxidant capacity than either vitamin E or C and are attributed to the greatly increased immune system coordination that elderberry supports and triggers.

Antivirin is an antiviral agent found in elderberry that helps to prevent viral infections by inhibiting their ability to invade cells.

For fighting cold and flu symptoms, elderberry is best started within 24-48 hours of symptom onset. A study of 312 air travelers who took 300 mg capsules of elderberry extract three times a day found that of those who got sick, those that used the elderberry capsules recovered faster and had less severe symptoms.

In Israel, Hadassah’s Oncology Lab has shown that elderberry stimulates the body’s immune system and they have integrated its use into their cancer and AIDS treatment protocols.

In China, elderberry is used in medicinal wines to treat pain associated with injuries and arthritis. Also used to treat cold and flu symptoms, the berries are considered excellent for Clearing Heat, indicated by such signs as red itchy eyes, muscle aches, fever, chest pain, constipation, and urinary tract infections. It is considered excellent for reducing swollen lymph glands and easing sore throats.

Elderberry is high in vitamin C. It contains 6 to 35 mg of vitamin C per 100 g of fresh berries, that’s up to 60% of your minimum recommended daily allowance. It is also high in fiber, containing about 25% of RMDA. The flowers contain ten times more flavonols than the berries and both the berries and flowers are very high in powerful antioxidant phenolic acids.

In general, the flowers are considered best for promoting sweating, restoring lung function, aiding urinary function, and clearing inflammation associated with empty heat. The berries are considered best for acute or chronic neuralgias, constipation, respiratory infections, and even food poisoning. The inner bark is mostly used for edema, obstinate constipation, arthritis, and gout. The flowers and berries are most typically used.

Elderberry is used in syrups, food colorings, body lotions, jams, and wine. In Romania a popular fermented fizzy drink, socata, is made from elderberries.

Elderberry is very valuable as a bird food.

The pith of an elder is used by watchmakers for cleaning tools before starting intricate work.