Echinacea was first used by the American Plains Indians. They used it mainly for its pain-killing properties. The herb is now also famous for its antibacterial, antiviral, antioxidant, and anti-inflammatory properties. It is used to treat herpes, respiratory infections, urinary tract infections, and digestive issues.

Watch a short video, from Ann Christensen, Founder and Creator of White Rabbit Institute of Healing™ – When Should You Take Echinacea?

Below is an overview of echinacea​, combining the best of Western Science, Oriental Medicine, Traditional Chinese Medicine (TCM), Shamanism, Folklore, and a wide range of healing modalities. Gain a balanced and thorough understanding of the healing properties of echinacea.

How to take FULL advantage of Echinacea's healing powers... 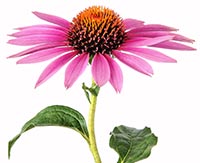 JOIN ME in an exploration of the healing herb, Echinacea (Zi Zhu Hua). Explore the benefits and applications of Echinacea, from Eastern and Western perspectives, and so much more!

Echinacea leaves are normally hairy with a rough texture, having uniseriate trichomes. The ray florets number 8-21 and the corollas are dark purple to pale pink, white, or yellow. Their pollen is normally yellow. Purple centers are distinctly conical in shape and surrounded by dullish purple ray florets. They have ovate leaves that taper to a sharp point at the end and the flowers bloom from June to August.

Nine species of echinacea are native to North America. They grow exceptionally well in the Midwest and Northeast regions. They are found in moist to dry prairies and wooded areas. These species are drought-tolerant perennials.

Parts Most Frequently Used: Root, Rhizome (said to have a more efficacious mixture of active chemicals), Stem, Flower, Leaf. Flower petals are edible and can be used in salads, otherwise not a food plant.

Key Constituents: Wide variety and complex. Phenols, cichoric acid, caftaric acid, alkylamides (fat soluble, inhibit tumor necrosis, and can have similar potency as the THC compound in marijuana), and polysaccharides (which increase the rate of phgocytosis)

Echinacea has been used by American Plains Indians for treating sore throat, and headache, and as an analgesic, or aid in reducing pain. They observed elk eating the plants when sick or wounded, and identified the plants as “elk root.”

In 1930 a Swiss herbalist heard that American Indians had said echinacea was good for colds and began marketing echinacea tinctures in the U.S. and Great Britain as a cure for colds and flu.

American Indians also treated snake bites and a wide variety of infections with echinacea. Word continued to spread throughout Europe, and it quickly became the most popular medicinal native plant from the new world.

Today it is a global multimillion-dollar industry. It is available at most pharmacies and supermarkets in tea, extract, and pill form.

The constituents found in echinacea represent a wide variety and complex blend of immune-enhancing and antimicrobial substances. Some of these compounds have direct antimicrobial properties and others stimulate or modulate different parts of the immune system, contributing to the herb’s strength in conferring immunity and fighting a wide variety of infections.

Echinacea has been proven to activate the reticuloendothelial layer (found throughout the body, but especially in the blood, connective tissues, spleen, liver, lungs, bone marrow, and lymph nodes), increasing alpha, beta, and gamma globulin (which are forms of antibodies that help fight infection), and increasing the rate of phagocytosis, or the ingestion of bacteria and other unwanted microbes.

Echinacea’s rhizomes are said to have the most efficacious mixture of active compounds found in the plant.

Echinacea is an important source of nectar for butterflies and many birds who flock to the plants to eat their seeds.

Echinacea is on the endangered plant’s list. So please only use “certified organically grown” instead of harvesting it from the wild.

Its name derives from the Greek meaning “hedgehog,” due to the plant’s spiny, central disk.

Echinacea belongs to the daisy and sunflower family.