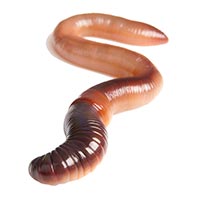 Earthworms have been used for thousands of years by many cultures all over the world to treat seizures caused by high fevers, prevent anemia post pregnancy, and to ease the pain of arthritic joints. Western science has confirmed the worms ability to lower blood pressure and relieve blood stasis caused by fevers. In many cultures, worms are a gourmet delicacy saved for elders and special occasions.

Below is an overview of Earthworm, combining and interpreting the best of Western Science, Traditional Chinese Medicine (TCM), Shamanism, Folklore and more. Gain a balanced and thorough understanding of the healing properties of Earthworm.

Medicinal Uses: Very high fevers with convulsions (It can even been used alone for this purpose), or fevers with headaches, dizziness and red eyes, infantile or adult fevers, wheezing due to Lung Heat, swollen painful joints, hemiplegia due to poor circulation, hot painful urination, even with edema, or inability to urinate due to Heat stuck in the Bladder,  lowers blood pressure, strokes, infantile convulsions, smallpox, muscle aches due to high fever.

The earthworm Lumbricus is in the megascolecidae family.

Earthworms live anywhere there is moist soil and dead plant material. They are abundant in rainy forests, but can also be found in many other locations as long as the soil is moist and full of microbiomes and nutrients.

History/Folklore: Earthworms have been used in Traditional Chinese Medicine, Ayervedic Medicine, Traditional Arabic, and Islamic Medicine for many thousands of years to treat acute feverish conditions.

In China, the best earthworms are said to come from Guangdong.

Modern science confirms that the three thrombolytic enzymes contained in earthworms: fibrinolysin (plasmin), profibrinolysin activator, and collagenase are effective in dissolving thrombus and restoring blood circulation to the brain helping to ease seizures, headaches, and other related conditions involving heat in the blood .

These same three enzymes have been isolated and are used in a drug called Plasmin. It is used to reduce the risk of ishemic cardiovascular problems such as strokes, embolisms and arteriosclerosis.

Earthworm’s immune systems are rich in leukocytes and humoral products that further contribute to their benefits as a healing substance.

A technique from Burma for using earthworms is to heat them in a closed pot until they are reduced to ashes.  The ashes are then used alone or mixed with tamarind seeds.  They can also be boiled in water with salt and onions. The resulting liquid is mixed with a patients food.

Native American Indians used earthworm poultices to draw out thorns and ease the pain of rheumatisms.

In Australia and New Zealand, the Maori consider earthworms a ceremonial food that was fed to their chiefs or as the last food to the dying.

Amazonian tribes consider earthworms a delicacy, and they are prescribed for women in the first month following pregnancy to help prevent anemia.

Earthworms have been used as a food in many cultures and are even considered a delicacy reserved for special guests and the elderly.

Earthworms are symbols of spring and rain as they come above ground in the rain, especially in the spring.

They are a sign of earth’s energy as they live in the ground and rejuvenate the soil with their castings. There movements through the soil allow roots space to move through the ground so they can access oxygen and other nutrients as they grow.

The effects of earthworm are enhanced by washing them in wine first.

In Burma, earthworms have been successfully used to treat smallpox.