Dandelion is probably one of the richest herbal sources of Vitamin K which aids bone mass and helps treat Alzheimer’s disease by limiting neuronal damage in the brain. Dandelion is an excellent general tonic for blood, skin, and digestive support.

Watch a short video, from Ann Christensen, Founder and Creator of White Rabbit Institute of Healing™ – Can I Drink Dandelion Tea Everyday?

Below is an overview of dandelion, combining the best of Western Science, Oriental Medicine, Traditional Chinese Medicine (TCM), Shamanism, Folklore, and a wide range of healing modalities. Gain a balanced and thorough understanding of the healing properties of dandelion.

How to take FULL advantage of Dandelion's healing powers... 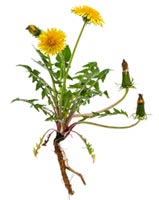 JOIN ME in an exploration of the healing herb, Dandelion (Pu Gong Ying). Dive deep into the benefits and applications of Dandelion, from Eastern and Western perspectives, and so much more!

There are more than 1,000 species across Europe. Dandelion belongs to the family of Asteraceae. It is a very hardy perennial plant, with long taproots, and long, jagged, dark-green leaves rising directly from the ground in a radiating fashion. Very small golden-yellow flowers collect together into a composite flower head, with hollow stalks filled with nectar that bees love. Almost the whole plant can exude milky white latex from wounds.

Believed to have originated in Central Asia, it is now found in many places all over the world.

History/Folklore: Dandelions are thought to have evolved about 30 million years ago in Eurasia and have been used by humans for psychic properties, food, and healing for much of recorded history.

Dandelions are a well-known food source. The flower petals, along with other ingredients like citrus, are used to make dandelion wine or can be added to cakes, salads or fried in butter. The young buds are high in protein. The ground, roasted roots can be used as a caffeine-free dandelion coffee. Dandelion was also used to make the traditional British soft drink of dandelion and burdock (LINK). Dandelion is one of the ingredients of root beer. Also, dandelion flowers and greens were once Victorian era delicacies eaten by the gentry, mostly in salads and sandwiches.

In gardens, dandelions create drainage channels in compacted soils, helping to restore mineral health to abused soils and prevent erosion. They tend to thrive in poor soil that is fairly acidic and low in calcium and compacted. Dandelions also aerate the soil and attract earthworms. Dandelion taproots will bring up nutrients for shallow-rooting plants, and add minerals and nitrogen to soil. Dandelion is also known to attract pollinating insects and release ethylene gas that helps fruit to ripen.

Dandelions also have famous healing properties. Culpeper says, “It is of an opening and cleansing quality.” First mentioned in China in the Tang Materia Medica of the 7th century. It was also recommended to restore health by the Arabian physician, Avicenna in the 11th century, who is attributed with first calling it dandelion. According to the Doctrine of Signatures (like treats like) dandelions are “signed” in yellow to cure diseases of yellow hues (i.e. jaundice). In the Catholic tradition, the plant is sacred to St. Bridget.

The homeopathic remedy SBL Taraxacum Mother Tincture is prepared from dandelion. The drug is extracted from the plant just before the flowers bloom.
Dandelion’s psychic properties include being able to repel witches if gathered on Midsummer’s Eve. It is also said to increase a person’s psychic abilities and can be used as a divination tool in tea.

Dandelions were once believed to have the ability to indicate time and direction. It was said that one could tell time by the number of breaths it took to blow the seeds from the stem. It has been called the “rustic oracle,” as its flowers open about 5 am and close at 8 pm, serving as a clock for shepherds in the field. It can also hint at weather conditions, as the flowers fold up when the sky is cloudy. Blowing on the seeds will tell you where your lover waits for you by the direction the seeds blow.

While all parts of the dandelion plant are nutritious and medicinal and have similar properties, here’s a shout-out as to why you might want to choose one part of the plant over another. The roots are favored for reducing “bad” (LDL) cholesterol, supporting brain function, and balancing metabolism. The leaves are favored for supporting eye health, decreasing water weight, bloating, and promoting weight loss. The flowers can especially help ease stomach cramping, reduce pain from backaches and headaches, and help to improve night vision. The milky sap that comes from the stems is said to nourish lambs and calves.

The English name “Dandelion” is a corruption of the French “Dent de Lion” meaning “lion’s tooth,” referring to the plant’s coarsely toothed leaves. The name “Piss-a-Bed” is a reference to the plant’s strong diuretic effects.

Many similar plants in the Asteraceae family have yellow flowers that are sometimes known as “False Dandelions.” Dandelions are very similar to cat’s ears (Hypochaeris). Both plants carry similar flowers, which form into windborne seeds. However, dandelion flowers are borne singly on unbranched, hairless and leafless, hollow stems, while cat’s ear flowering stems are branched, solid, and carry bracts. Both plants have a basal rosette of leaves and a central taproot. However, the leaves of dandelions are smooth or glabrous, whereas those of cat’s ears are coarsely hairy.

How to use Dandelion (Pu Gong Ying) and take FULL advantage of it's healing powers!