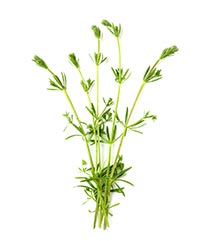 Cleavers are a valuable diuretic. It stimulates the lymphatic system and is often used to treat skin problems ranging from seborrhoea and eczema to psoriasis. The herb has also been used in both kidney and liver Spring tonics as a general blood cleanser and even as a cleansing tonic used during serious ailments such as cancer, especially if there is nodal involvement.

Cleavers are an annual herbaceous plant in the family Rubiaceae, which contains over 3,000 species. The plant has creeping straggling stems that branch and grow along the ground and over other plants. The stems and leaves of cleavers are covered with small hooked bristles that attach to passing objects. These “hooks” are used by the plant to climb their way upwards through undergrowth to find sunlight in the tops of trees and shrubs. The leaves are narrow, lance-shaped and encircle the stem. The flowers are white and star-like and bloom from April through September.

Cleavers are native to Europe, North Africa, Asia and perhaps North America, though this is still being debated. Now cleavers are naturalized in most parts of the world. Cleavers like to grow in woods, fields, along hedgerows and among cultivated crop rows. The plant likes moist leafy soil in partial shade and can be invasive.

History/Folklore: Cleavers are used both internally and externally. As a poultice the herb is useful for treating wounds and a variety of stubborn skin disorders. It is cooling and soothing. Internally it is commonly used as a tonic for the kidney, liver, and lymphatic systems, making it useful for treating edema, arthritis, ear and throat infections, cleansing the blood, soothing the bladder and treating a wide variety of skin disorders.

The botanical name “aparine” derives from the Greek word meaning to “lay hold of” or “seize.” In Europe the dried, matted foliage was used to stuff mattresses and the roots were used to make a permanent red dye. Deer are also known to bed down in dense patches of cleavers, also commonly called, “Bedstraw.”

As a diuretic and lymphatic tonic it is useful for treating swollen glands, cysts and post-menstrual swelling and edema of the breasts and legs.

Cleavers is often combined with goldenrod and nettles to help tonify and strengthen weak kidneys.

Cleavers are said to be their most potent fresh or in alcohol tincture or extract. Dried cleavers are considered milder and less potent.

Raw cleavers taste like coffee (which is also a member of the family Rubiaceae) and the dried and ground herb can be roasted and is often used in this form as a coffee substitute.

The constituent, asperuloside, is a substance that is converted into prostaglandins in the body. Prostaglandins are hormone-like compounds that stimulate the uterus and blood vessels. An extract of cleavers (½ tsp a 3x a day) has been shown in studies to help lower blood pressure without slowing the heart rate or inducing unwanted side effects.

In Sweden, a thick mat of the stems is still used as a filter for milk as it is said to provide milk with the healing properties of the herb. The Ancient Greek shepherds were said to use the plant in the same way when they were out in the fields tending and milking their sheep.

Cleavers have been used as an ingredient in love potions.

The seeds of cleavers have been found in Neolithic settlements, and in times past were used to curdle milk into cheese. The plant’s botanical name, “Galium” derives from the Greek word for milk and relates to this ability to curdle milk.

The famous 17th century herbalist, Culpeper, said, cleavers can be “taken in broth, to keep them lean and lank that are apt to grow fat.”

Rumor has it that the plants clinging action inspired the creation of Velcro, the sticking fabric adhesive used in clothes and shoes and that is why Velcro is sometimes also called “cleavers!”

While cleavers can be eaten raw, they are typically added to soups and stews due to their strong coffee-like flavor, which is better enjoyed cooked and blended with other herbs and foods.

An infusion of cleavers is a safe long-term aid for treating kitty urinary tract disease (FLUTD).

Cleavers assists the lymph nodes in cleaning out toxins, helping to treat a wide variety of skin, kidney, liver, and blood disorders.