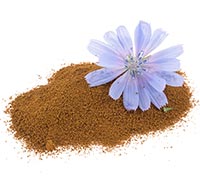 Want to cut down your daily caffeine consumption? Ground chicory root may be for you.  Not only is the root a coffee substitute but the root, leaves and flowers have a long history for their medicinal properties as well. Chicory is used as a liver tonic, to moderate your heart rate, increase bile production, ease constipation and kill parasites.

Chicory is a woody perennial herbaceous plant in the dandelion family Asteraceae. It’s flowers are typically bright blue and bloom from July through October. The leaves are stalked lanceolate and unlobed. When flowering the stems are tough, grooved and a bit hairy.

Chicory is native to Europe and is now commonly grown in North America, China and Australia. It likes wastelands, roadsides and pastures and grows best with good sun exposure, well-drained soils of sandy loam.

History/Folklore: Many varieties of chicory are cultivated for salad leaves, roots (which are ground and used as a coffee substitute) and as forage for livestock. It has been cultivated as early as 5,000 years ago by Egyptians as a medicinal plant used to support liver function, stimulate an appetite and to sedate an anxious person.

Wild chicory leaves are bitter and popular in many regional cuisines, including Italian, Greek, Albanian and Turkish. In Albania, the greens are used as a substitute for spinach. Cooking helps to reduce the bitter quality of the greens. They can then be sauteed with garlic, anchovies and other popular ingredients, depending on the chef and the region. The leaves can be eaten like celery and the roots and leaf buds can be boiled and eaten as well.

The famous 17th century English herbalist, Nicholas Culpepper, described chicory as, “more dry and less cold than endive, so it opens up more. A draught made of a handful of the leaves or roots boiled in wine or water, drives our choleric and phleghmatic humours.”

Root chicory (Cichorium intybus) is cultivated in Europe as a coffee substitute. The roots are baked, roasted, ground and used as an additive or substitute to coffee. During the Great Depression and WWII, chicory was often used as a coffee substitute. In America, in New Orleans, chicory is a drink of choice, and not merely a substitute. Chicory root has none of the caffeine associated with regular coffee. Besides chicory, beets, acorns, parsnips and burnt sugar have all also been blended with coffee to make the coffee go further during times of hardship.

Some beer brewers use roasted chicory to add flavor to their stouts.

Chicory root extract is used as a dietary supplement and food additive. The constituent, inulin, found in chicory, is a popular prebiotic added to yogurts, a soluble dietary fiber and a functional food.

The flower has been popularly used in German folk medicine for treating many common ailments and as a tonic  for gallstones, stomach disorders and sinus problems. Records show it was used to treat constipation, weight loss, improve bowel movements and support general health.

Chicory is one of the 38 plants used to prepare Bach Flower Remedies.

In America, curly, escarole or true endive (Cichorium endivia) is often also called “chicory.” The plants are closely related but not the same.

Chicory is generally divided into three types: raddicchio, sugarloaf and Belgian endive (not to be confused with curly or true endive (Cichorium endivia).

Chicory is an excellent substitute for oats for horses, due to the plant’s protein and fat content.