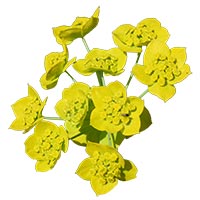 Bupleurum is a classic Chinese herb used to address disruptions of the liver and enhance what is called the “free-flow” of Qi (Energy) in the body. It is famous for aiding immunity and helping to ease Hot external disorders that are penetrating into the body with signs of chills and fevers, headaches, chest pain, and diarrhea. It calms the emotions and is also used to ease menstrual cramps.

Below is an overview of Bupleurum, combining and interpreting the best of Western Science, Traditional Chinese Medicine (TCM), Shamanism, Folklore and more. Gain a balanced and thorough understanding of the healing properties of Bupleurum.

Bupleurum is a very large genus of plants in the Apiaceae family, with 190 species. They are members of the Umbelifers. It has delicate yellow flowers with sickle shaped leaves that resemble fennel leaves. It is a perennial herb that can grow up to 3 feet tall. The flower’s petals are arranged in groups of five.

Native to East Asia and China. There is a native species found in Northern America, but it is now be found throughout the U.S.

Caution: Considered safe. It can occasionally cause nausea or vomiting.

History/Folklore: Bupleurum (Chai Hu) is often combined with Skullcap (Huang Qin) to treat Heat in the Lesser Yang stage of disease when the pathogen is at the half-exterior and half-internal level of advancement into the Body. Used with Angelica (Dang Gui), the two herbs will help harmonize the Blood. Blended with Mint (Bo He) it can help ease emotional depression, irregular menses, and a stifling sensation in the chest.

B. chinesis, known as “Northern Bupleurum” (Bei Chai Hu), is hard and harvested in the autumn. It is also called “Hard Bupleurum” (Ying Chai Hu) or “Autumn Bupleurum” (Qiu Chai Hu). It is considered to be better at resolving Lesser Yang disorders than B. scorzoneraefolium.

B. scorzoneraefolium is also called “Southern Bupleurum” (Nan Chai Hu) or “Soft Bupleurum” (Ruan Chai Hu). It is considered to be better than B. chinesis at spreading Liver Qi (Energy) and relieving Qi (Energy) stagnation.

Bupleurum has been shown to inhibit the increase in capillary permeability caused by histamine, while having no effect on histamine-induced or anaphylactoid shock.

In China, Bupleurum is generally considered to be better at relieving fevers than either Cimicifugae (Sheng Ma) or Puerariae (Ge Gan) which have similar functions.

The Chinese tend to use Bupluerum most often in formulas and not alone. It is included in the famous Chinese formula called “Free and Easy Wander,” referring to the plant’s properties to enhance the free-flow of Qi (Energy) in the Body. This formula is famous for helping a person to “go-with-the-flow” instead of clashing with life-obstacles and events. The formula also eases menstrual cramps and other forms of Qi (Energy) stagnation in the Body.

Bupleurum can be grown as a beautiful ornamental flower. It’s sickle shaped leaves have lead to the plant being called “Hounds Ear” or “Hare’s Ear.”

In China, the use of bupleurum roots as a medicine predates the written records.