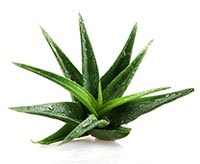 Aloe is a genus containing over 500 species of flowering succulent plants. The most commonly known is Aloe vera. It is a cactus-like plant with a long history of being used internally and externally as a medicine to treat wounds and upset stomachs. Studies confirm the plants ability to effectively treat genital herpes, psoriasis, burns, and reduce the incidence of tumors in the liver, bone and spleen by 90%.

Want to Find Out More about Aloe Vera?

Take full advantage of the healing power of Aloe Vera (Lu Hui). What does Aloe Vera treat? Find out what you DON’T know about how and why Aloe Vera works. Find Out More…

Aloe leaves form a large, thick fleshy rosette of leaves. The flowers are tubular and most often yellow, orange, pink or red. The leaves vary in color from grey to bright-green.

Aloe vera is native to tropical and southern Africa, Madagascar, Jordan, the Arabian peninsula, and various islands in the Indian Ocean. A few species have naturalized and are found in India, Australia, and North and South America.

Caution: Considered safe. Not recommended for long term use due to its laxative capacities.

Aloe produces two substances, gel and latex, that are both used medicinally. The gel is a clear, jelly-like substance found in the inner part of the leaves and the latex comes from just under the plant’s skin and is yellow. Some aloe products are made from the whole crushed leaf and will therefore contain both the gel and the latex.

The gel is used for weight loss, diabetes, hepatitis, stomach ulcers, asthma, inflammatory bowel syndrome (IBS) and radiation-related skin sores. The latex is mainly used as a laxative, but has been used to treat colds, bleeding, colitis, depression, glaucoma and hemorrhoids. Fresh aloe leaves are taken orally to help cancer.

Studies are indicating that aloe helps heal wounds by improving the circulation of blood flow and preventing cell death around the wound. The gel also appears to be harmful to certain types of bacteria and fungi improving its wound healing abilities.

A study completed in 1996 in Sweden focusing on using aloe vera to treat chronic psoriasis indicated a cure rate of 85% with no relapses reported within the next 12-month follow-up.

The constituent, acemannan, found in aloe helps treat canker sores and dry sockets in the mouth. The hormones, auxins and gibberellins, found in the plant help heal wounds and have anti-inflammatory properties. And the anthraquinones, are known as laxatives, analgesics, antibacterials and antivirals.

The Ancient Greeks and Romans are documented to have used aloe vera to treat wounds and ulcerated male genitals. The Ancient Egyptian Queen, Cleopatra, regarded aloe gel as a foundation of youth and used it to preserve her skin. The Egyptians also used aloe in their embalming processes.

The Chinese have long used aloe gel as a purgative and in India, the gel is regarded as an effective cooling tonic. The Chinese will also use aloe in pill or powdered form, but not in decoctions. Good quality gel is very dark green and lustrous with a strong taste.

The aloe that is referenced in the Bible is an unrelated fragrant wood used as incense.

One aloe leaf can be used for weeks. The severed end of the blade is self-healing and the thin film that develops can be easily broken with each use.

The unprocessed aloe contains aloin, a laxative, the processed juice does not contain significant levels of aloin and is used to soothe and aid digestion.

Some constituents in aloe may possibly be good for inhibiting the growth of tumors. As yet, studies have not confirmed these claims for human usage.

American aloe (Agave americana) is not an aloe plant. It belongs to a different family of plants.

In the Middle Ages, the liquid in the leaves was used as a purgative.

Aloe vera is recommended as a natural method for building immunity without causing allergic reactions or unwanted side effects.